The new movie Greenland will make you sick. And I cannot recommend it highly enough.

An end-of-the-world thriller that arrives during, well, all of this, director Ric Roman Waugh’s film represents the best of a historically stupid genre. While there are still loads of mediocre CGI shots depicting annihilated world cities, and lots of radio and cable TV news chatter doing the heavy lifting of narrative exposition, Greenland manages to be a disaster movie that feels acutely entertaining, genuinely thrilling, and achingly, nauseatingly real. This is how the world ends, not with a bang but with Gerard Butler.

Hollywood’s favourite down-market leading man stars as the perfectly named John Garrity, a structural engineer who is just trying to be the perfect dad to his young son Nathan (Roger Dayle Floyd) and a better husband to his estranged wife Allison (Morena Baccarin) in suburban Atlanta. But then fragments of a passing interstellar comet named Clarke, which scientists previously thought posed no threat to Earth, begin to shower the planet. One rock wipes a good chunk of Florida off the map, and suddenly, the entirety of humanity faces an extinction-level event. You know: good, fun, not-all-pertinent-to-our-current-reality stuff. 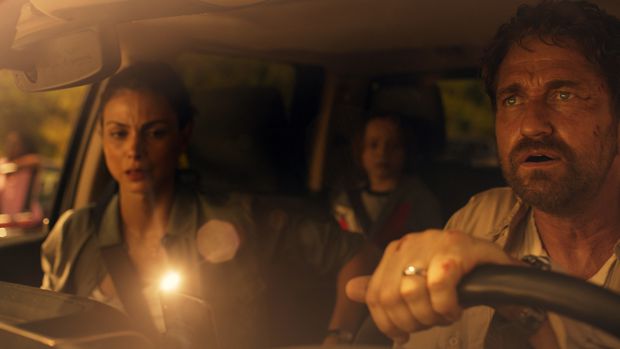 Luckily, though, the Garritys have been selected by the U.S. government as essential to the world’s post-Clarke existence, thanks to John’s expertise in construction (after this movie, applications to structural engineering programs should skyrocket.) Now, the family has just under 48 hours to make it to a secret military airfield, hop aboard a plane to Greenland, and tuck themselves into a secure underground bunker. Start the ticking clock, complete with complications aplenty and the appearance of a dramatic device I’ll dub Chekhov’s Insulin.

At every turn, Greenland could have been a groan-inducing mess. As anyone who has suffered through Deep Impact, The Day After Tomorrow, 2012, San Andreas and Butler’s own Geostorm knows too well, Hollywood’s last meal of choice is a heaping serving of cheese, gooey and viscous. Yet Waugh and screenwriter Chris Sparling ground Greenland’s many end-of-days clichés – the anxious crowds scrambling for safety, the paranoid survivalists, the plane that has to take off right now people! – with a riveting, genuine sense of emotional relatability.

The Garritys are not just cardboard cut-out creations, to be disposed of whenever it’s convenient. We care about this particular apocalypse because we care about these particular characters. Every close call that the Garritys face – and there are many, including one white-knuckle set-piece involving a military tarmac that made me want to vomit, but in a good way! – further invests you in the film’s world. Or what’s left of it.

Butler’s presence is essential. The actor occupies a curious position in the Hollywood ecosystem, his blue-collar action spectacles not quite as polished or four-quadrant palatable as the slick offerings of higher-tier contemporaries like Dwayne Johnson. Yet Butler has, across his improbable Olympus/London/Angel Has Fallen franchise and scuzzier crime and punishment outings like Den of Thieves and Law Abiding Citizen, displayed a remarkable level of commitment toward grizzled, down-and-dirty ridiculousness. The man is a survivor, and if you sidle up close enough to him, you’ll make it through the worst the world has to offer, too.

Although Greenland is just the second collaboration between Butler and Waugh, after 2019′s Angel Has Fallen, it is easy, and terribly exciting, to see the two develop the kind of star-director creative relationship that can lead to a B-movie action filmography for the ages. (The pair seem to recognize such a truth, already starting production on a CIA thriller called Kandahar that I will absolutely be first in line to see.)

Greenland isn’t a perfect movie. There are great leaps in logic, a stopover to see Allison’s father that offers nice scenery-chewing for Scott Glenn but also a noticeable delay to the film’s barrelling momentum, and an ending that would have been magnificent if it came 45 seconds earlier. But if you want a movie to nail-gun you to your seat, then you must visit Greenland. Just pack some Gravol.