How old is Gerard?

Is he married or single?

Gerard is single. He chooses to keep his private life, private. He is pictured with countless women at countless events and he is a friendly guy so just because he is pictured with a woman does not mean he is suddenly dating her. We cannot and will not answer e-mails about his personal life or his tastes in women, because frankly, we don’t ask him those types of questions since it is none of our business.

Yes, he does. They can be found with the verified checkmark next to the account name. Any other persons or person claiming to be him should be ignored and reported. These are the links:

How tall is Gerard?

Where does he live?

He maintains homes in California and New York City, when he’s not on location shooting a film or traveling to promote a project or just for fun.

Does he prefer to be called Gerry or Gerard?

His professional name is Gerard, but he calls himself Gerry, as do his friends. This quote from the January 11, 2005 Jay Leno appearance pretty much answers this question:

“[in a deep Scottish accent] “GerERD. Your name is GerERD.” And, and, but, it’s funny, but, I did a magazine interview a few years ago, and they asked me, “What do we call you?” And I said, “Well, you say it just ‘Gerry,’” because when Americans say “GerARD,” it drives me crazy, when my mum does that. But they got it the wrong way around, and they put it in the magazine that I hated being called Gerry. And so then all my friends are calling me, going, [in a high-pitched, mocking voice] “Ooh, GERard.” [audience laughs] And [I said] “I didn’t say that! I didn’t say that!”

Does he drink alcohol?

What colour are Gerard’s eyes?

Green most of the time, but can seem blue.

Does he have a pet?

Yes. He had a dog named Lolita who was unfortunately killed by coyotes. She was a pug. He now owns a rescue dog named Shushka, who was a stray in Bulgaria while he was filming Angel Has Fallen. 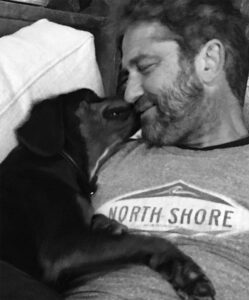 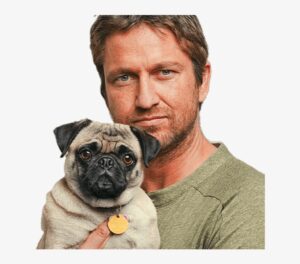 What is his favorite color?

Can I have his phone number?

GB.Net has spoken to him but we do not have his phone number. And if we did, we would not be at liberty to disclose such personal information.

Does Gerard have an e-mail?

Yes, but not for the public. Personal messages to GB.Net are discouraged, since we are a fan site, and while we have spoken to Gerard, we aren’t his mail service. Message sent to Gerard through our e-mail will automatically be deleted.

Does Gerard ever visit GB.Net?

He has seen the site. He has given us two extensive interviews and sent audio messages to fans through the website over the past twenty years.

Did he do all his own singing in The Phantom of the Opera?

What’s the story behind the ring and bracelet he always wears?

This quote is from our June 2004 interview with Gerard:

” ANSWER: “You know, funnily enough, .the reason I met Tonya [his assistant] was though an ex-girlfriend of mine.who I went out with for a couple of years and she got me [the ring] after two weeks of going out, it freaked me out because it’s inscripted ‘Dedicated to the one I love.’ We were only seeing each other for two weeks and I was like ‘wait a minute, wait a minute, are you saying you love me?’ She had one from a previous boyfriend. So it was kind of strange that she had one from a previous boyfriend.”

What football club does he support?

He supports The Celtic Football Club from Glasgow, Scotland. From a 2004 interview about his audition for Phantom of the Opera he said:

I support the Celtic football team which was in the semi-final for the European cup and it was the first time they’ve been in for many years. I went to the game the night before (the audition) in Glasgow with all my crazy Glaswegian friends who screamed at the top of their lungs the whole night and I had to sit there and clap to protect my voice because I was singing for Andrew Lloyd Webber the next day in London.

Does Gerard’s family have a tartan?

According to interviews Gerry has done, no, as the family is of Irish descent.

Is there more information on his band Speed and did ever record anything?

The following history was provided by Alan Stuart, founding member of Speed:

Gerry and Alan met in a law firm called Morton Fraser. Gerry was a trainee solicitor and Alan was already a qualified lawyer. Alan had a band called “Speed of Life” with a girl singer called Gill Wood. Gerry wanted to hang out with the band and they became friends. Gerry told Alan he could sing and (after an impromptu audition in a pub toilet) ended up singing backing vocals in that band. They recorded three songs with Gerry doing backing vocals. They had some really wild times with that band until Gill left and they decided to carry on with Gerry singing on his own. You can imagine what a good front man Gerry was, and things began to take off for that band.

The bass player was Kenny Mullen who was at Glasgow University with Gerry and was Secretary of the Law faculty Law Society when Gerry was president. Kenny is a very fine bass player (his dad is a drummer). The drummer was David Watt who is one of Scotland’s best drummers. David used to go clubbing with Gerry when they were at University in Glasgow. When Gill left the band they were round at a friends flat (in Edinburgh) who said that there was a guy who played drums living in the flat immediately above. They were looking for a new drummer so they went upstairs and David answered the door. Gerry didn’t know that David was living there! And so they got their new drummer.

Gerry was quite wild in those days and you never knew what he was going to do next! The band had a residency during the Edinburgh Festival in the Fringe Club. They were the house band and went on at 1am after comedians like Rich Hall and Greg Proops had finished their acts. They used to pack the place out and rocked it till it shook. People had to dance on tables and chairs because there wasn’t enough room. Eventually they had to hire Rock Steady to do the security as things could get a
bit “lively”.

It was not really a college band at all, and Gerry did make recordings, including the song “Going Down Slow” that was played for Kim during the first GB.Net exclusive fan site interview. Speed played some big gigs including an open air gig in Holyrood Park, Edinburgh to an audience of about 10,000 people.

Speed was a cross between the Doors, the Stones and Sly and the Family Stone. Things however did not work out for Gerry as a lawyer and he left Edinburgh to seek fame and fortune in London, commuting up to Scotland for gigs. When the bass player announced that he too was going to London, that was the end of the band. They had a blast and Alan says he would not have missed it.

The recordings of the band are not available for purchase, but Alan says Gerry was justifiably very proud of his singing.

Has he ever released an album besides The Phantom of the Opera soundtrack?

No, he has not, although his former band Speed recorded a few things here and there.

What does he like to do in his spare time?

In what little spare time he has, he enjoys traveling, hiking and running.
We use cookies on our website to give you the most relevant experience by remembering your preferences and repeat visits. By clicking “Accept”, you consent to the use of ALL the cookies.
Cookie settingsACCEPT
Manage consent