It might be argued that a global pandemic is not the best time to be releasing a movie about the end of the world but Gerard Butler begs to differ.

The Scottish action star’s new film, Greenland, has planet Earth facing destruction from an approaching comet, and leans hard into how society could devolve in the face of an existential threat and just how far individuals might go to ensure their survival and that of their loved ones.

It was due to for release in cinemas last year as the coronavirus raged around the world and protests and violent riots flared up around the US but was delayed when cinemas shut and will finally stream on Amazon Prime Video this Friday.

Butler says the movie not only provides perfect escapism for those missing the big-screen experience, but thinks audiences will now view it in a different light after the unprecedented events of the past 12 months. 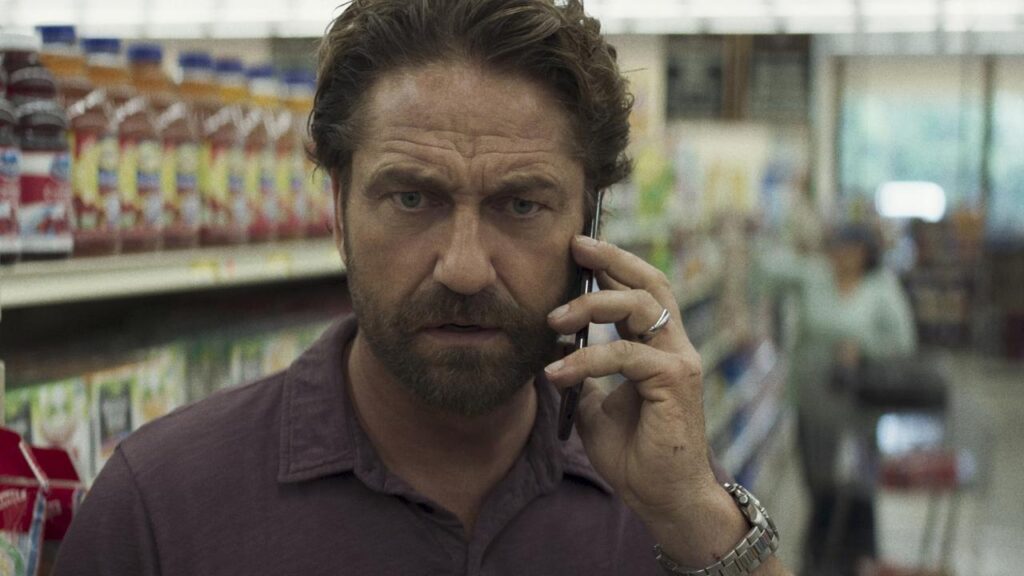 “I feel that now people watch the movie with a way deeper understanding of what really happens when something really is out of our control,” he says via Zoom call from his home in Los Angeles.

“This isn’t just all about special effects that, at the end of the day, are kind of fun but meaningless. It actually goes pretty deep into the psyche of a family and a population at large for good, bad and indifferent and how something like this would play out.”

Butler says that obviously he and his castmates had no clue what was just around the corner when filming took place in and around Atlanta in 2019, but agrees that “it definitely felt more far-fetched then than it does now”.

“But then again,” he adds, “if you took away the pandemic, we still have a world full of fires and hurricanes and tsunamis — it was still something that felt very timely and symbolic of where we are at and what we stand to lose and what ultimately do we mean to each other as people.”

His co-star and on-screen wife Morena Baccarin concurs, saying that 2020 was a time for reflection as individuals and as a society — and Greenland is timely for the spotlight it shines on how humanity responds to a crisis, for better and worse.

“Our film talks about people who do desperate things for desperate measures and people who do good and try to help,” she says. “I think we have all experienced that and also seen how first responders just dive in and put themselves and their lives on the line. But I think our film will also be received well because we need hope and escape and to have life be reflected back at us in a way that is positive and I think ultimately the film does have a good message about family and rebuilding and surviving.”

Butler says he took the part of John Garrity, a structural engineer whose specialist technical skills afford him and his family a place in a purpose-built bunker built to ensure the survival of the human race — if they can reach it — precisely because of his ordinariness. Butler’s best known films of late have been blockbusters such as Geostorm, Den Of Thieves and the hit action-thriller franchise in which he stars as the secret service agent Mike Banning, which began with Olympus Has Fallen and has spawned two sequels so far, with another on the way. Butler says that while the practically bulletproof bodyguard to the President would probably try to “punch the comet in the face”, he was looking for a role with a little more nuance, something that was more Tom Hanks than Mike Banning.

“It was almost like this script manifested itself because that’s what it felt like,” Butler says. “To play a very relatable human being — someone who is not perfect. He’s flawed – he’s kind of trying his best but he’s made a lot of mistakes but when a situation like this arises, with such extreme danger, then you really see what he is made of.”

Amid the grand special effects as debris from the planet-killing comet approaches Earth, Greenland also poses some uncomfortable questions of its audience: chief among them, how far would you go to protect your family and what would you do if you thought you only had days to live? At one point Baccarin’s character’s son is stolen and just contemplating that scenario gave the mother-of-two actual nightmares.

“That was pretty brutal,” she says of filming the highly emotional scenes. “I hated doing them but it was also somewhat rewarding because it was very easy to put myself there, having two small children. The thought of my children being ripped away from me like that is every parent’s worst nightmare. I stayed up many, many nights after shooting that scene having nightmares about it.”

Another scene highlights the selflessness of first responders, who still show up for work knowing full well that their days are numbered, but committed to seeing the job through. Baccarin chokes up as she compares their heroics to those of the frontline health workers in her native New York, which was the epicentre of the first wave of the coronavirus pandemic in the US last year.

“It was so moving in New York every day at 7 o’clock when people would bang their pots and you could hear the whole city — I get teared up when I just think about it — appreciating all the frontline workers and the nurses and the doctors in hospitals,” she says.

“I don’t know what makes them do what they do — they are better people than I am. I am just an actor who brings them entertainment and I get to portray them in movies. They are doing far more superior work than I am.”

Baccarin says she thought long and hard about how she’d spend her last moments on Earth and her response changes according to her anxiety levels at any given moment.

“There are times when you feel like you are just going to sit at home and drink a glass of wine and spend my last few moments relaxing with my family and it is what it is,” she says. “And then there are moments when you’re like ‘I’m going to go down with a fight and talk to whoever will listen and get on whatever plane I need to get on’.”

As for Butler, he says he’d gather his nearest and dearest and head bush.

“I feel like I would get the people closest to me, my family and get out somewhere in nature that touches me or them or us deeply.

“I feel like when you have those moments – and we have all had them — where it’s almost like a moment of communion with everything, then suddenly the comet would make sense. Because it just is what it is.”