When you hear that Gerard Butler is headlining an end-of-the-world movie, you can’t help but have expectations of what that movie will involve. Perhaps, say, Butler will find a way to go all Mike Bannon on a comet.

Greenland takes any notions you might have about such a movie and does the complete opposite.

The new movie – out on Amazon Prime Video UK on Friday (February 5) – sees Butler and Morena Baccarin play an estranged couple who have to make a perilous journey with their son to a potential safe haven to survive the end of the world.

But this isn’t Butler in saving-the-day hero mode and that’s exactly what he was looking for. “I had said to my team just before, ‘It’d be great [to] have a character that has more of the Tom Hanks than Mike Bannon’. Shortly after, Greenland arrived on my doorstep,” he tells Digital Spy.

“It has all the trappings and all the spectacle, but really it’s an intimate character portrait and a love story, really, of this family coming back together. They’re very fractured at the beginning of the movie and strangely through all of the insanity that they have to go through as the pressure builds and society starts to decay, it brings them back together as they appreciate what’s important in life.”

Of course, Greenland still has action sequences where Butler’s character has to fight for his survival, but overall, it’s more grounded and focused on their family survival. It even has a scene where Butler leaves a note apologising for taking someone’s car, where Mike Bannon would just smash through the window and drive away.

This low-key approach to a disaster movie, rather than being an all-out spectacle, was also what attracted Baccarin to the movie.

“I love a thrilling spectacle ride as much as the next guy, but it was really nice that it was rooted in a real family drama and had an emotional arc to it. Not only is that more rewarding as an actor to play, but also it connects the audience to the story a little bit more,” she explains.

“If I have a very strong, rooted emotional arc as a character, it makes it a little bit easier to have the reactions and to be present in a scene. If it’s just reacting to empty green screens and giant explosions, then you lose the thread a little bit.”

Greenland does still take place at the end of the world as fragments of a comet destroy cities worldwide though, with one incoming fragment set to cause an extinction level event, so there will be explosions.

And just like director Ric Roman Waugh and writer Chris Sparling’s approach to the apocalyptic events in the movie, there was a grounded realism to the set pieces that left its stars dodging genuine explosions, rather than just imagining the destruction around them.

“Meanwhile, I’m driving past a woman who literally has a bomb strapped to her back that blows up as if a fragment is hitting her. That’s something that Ric loves to do. There’s no getting out of it, there’s no stuntmen in there, you’re in the same shot as every explosion, every tip, every smash and that really helps ground it.”

Originally set for a UK cinema release in August 2020, Greenland was delayed like so many other movies by the ongoing global situation.

Despite the delay, the movie is still arriving during the pandemic and as a result, it’s given an extra resonance to what we’re seeing in the news every day. During their journey, the family experience the best and worst of humanity as everyone reacts differently to the events around them.

“It feels very reminiscent to working on this film. Our film does not shy away from the spectrum of what happens to humans when they are faced with difficult challenges and extreme dire circumstances,” Baccarin reflects.

But while Butler agrees that Greenland does showcase the best and the worst, he prefers to focus on the more hopeful side, especially in terms of how it relates to the situation that we’re all going through right now.

“I feel like the media so often focus on the negative parts of society during a pandemic, but if you really go through everybody, almost everybody is acting heroically every day, nobody more so than the medical services,” he concludes.

“There’s so many beautiful things that come out of this pandemic and some ugliness as well, but I feel like it’s been way more positive, but the horror sells, so that’s what you hear of.”

Greenland is released on Amazon Prime Video in the UK on February 5. 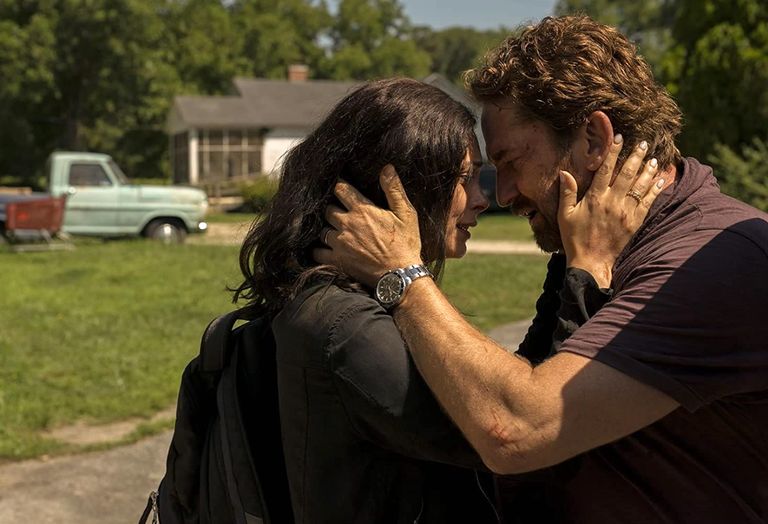