Gerard Butler stars in Ric Roman Waugh’s apocalyptic thriller, which was released theatrically overseas and will roll out on Premium VOD in the U.S. starting mid-December.
From quarantines to climate change to the Boogaloo Bois, it feels like we’re living in the midst of a real-life disaster movie. So who, in that case, actually wants to go and watch a disaster movie?

And yet, Greenland, the latest action vehicle to feature Gerard Butler in raging midlife crisis mode, offers up the kind of doomsday catharsis that the world perhaps needs. It’s premise may be a bit second- or third-grade-ish — Butler has to save his family from a comet threatening to destroy all of humanity — but the gritty verisimilitude that the star and director Ric Roman Waugh bring to the table goes a long way in making this B-level blockbuster a timely and guilty pleasure.

Released over the past months in a few dozen foreign territories, where the moderately budgeted production has so far grossed just under $28 million, the movie’s domestic theatrical plans were recently scrapped by STXfilm for a Premium VOD strategy, making it available for download by mid-December. Such a move will likely deal another blow to U.S. cinemas in desperate need of Sturm und Drang spectacles like this one, where the end of the world can be both terrifying and pretty awesome to behold.

Like a Roland Emmerich movie made with less money, bombast and in-your-face patriotism, Greenland is a darker and more ground-level experience, only really going big when it needs to (and can afford it). If anything, if feels closer to a film like World War Z than to giant-rocks-destroying-the-planet flicks like Armageddon or Deep Impact (the latter, directed by Mimi Leder, still holds up rather well), with set-pieces that play as unnervingly real no matter how improbable they may be.

At the center of all the mayhem is Butler, playing a middle-aged construction manager named John Garrity who’s been kicked out of the house by his wife, Allison (Morena Baccarin), and could use either a stiff drink or a prescription for beta-blockers, or probably both. The only thing keeping John from going off the deep end is his son, Nathan (Roger Dale Floyd), who’s about to celebrate a birthday party at the couple’s picturesque suburban home — well, in John’s former home.

That party comes to a quick and teary-eyed end with the arrival of Clarke, a comet passing dangerously close to earth that leaves multiple fragments crashing into the atmosphere, sending one of several shockwaves straight into John’s messy life. Soon the family is rushing together toward a military evacuation zone — as an expert at building skyscrapers, John has been selected by the U.S. government for survival — facing tons of obstacles along the way, with pieces of Clarke raining down at untold intervals and wiping out entire cities. (For some reason, Tampa is the first to go.)

Waugh and screenwriter Chris Sparling (The Sea of Trees) do a terrific job teasing out the action in ever-increasing waves of fury, starting relatively small and then pulling out the big guns in the final act. News coverage, radio reports and other official messages lend an eerie, realistic air to the proceedings, beginning with the fact that experts seem to fully underestimate the scope of the calamity, until it’s too late and people are out raiding supermarket shelves or otherwise scrambling for their lives. Sound familiar?

Separated from his wife and son about a third of the way into the plot, John spends much of the film trying to make his way back to them, at one point traveling like a refugee in a truck headed for the Canadian border that doesn’t wind up going very far. Meanwhile, Allison and Nathan get picked up by a creepy Southern couple (David Denman, Hope Davis) who looks like they’re on their way to an Evangelical revival meeting and take way too much interest in Nathan’s future.

The images of social breakdown — whether rioting, looting or, in one memorable scene, a bunch of millennials celebrating the mass destruction at a rooftop kegger — are telling in how they appear to be torn from the here and now. Likewise, the way the 24-hour news cycle covers events, with catchy on-screen tags like “Clarke’s Planet Killer,” underline how easily the end of the world is transformed into a spectacle that can both decimate us and serve as infotainment.

While Butler has headlined these kind of scenarios before, such as in the much less notable Geostorm, or else in the Olympus Has Fallen series — the third and best installment of which was directed by Waugh, a former stuntman whose other credits include taut thrillers like Snitch and Shot Caller — here he plays an ordinary hero whose only major skill seems to be his ability to competently drive SUVs, pickup trucks and other giant gas guzzlers. Still, this is one of his better recent performances, perhaps because he’s particularly convincing as a paunchy desperate husband who seems to be just one custody battle away from having a massive coronary.

The other key turn comes from Scott Glenn as Allison’s crusty rancher dad, Dale, a man who welcomes the apocalypse with ample supplies of sangfroid and Maker’s Mark. The calm interlude that takes place on Dale’s horse farm offers John and his family a bit of respite before a race-against-the-clock denouement that provides the film’s most daunting set-piece, when an interstate highway is suddenly pummeled by comet debris.

Such sequences remind us of why we love disaster movies in the first place: They dish out sensational depictions of earth-shattering events that we can relish from the safety of our seats (or, in the case of most U.S. audiences now, from our couches). And yet, what makes Greenland stand out is how, at certain times, what we’re watching doesn’t seem so spectacular, but very much like the real thing — albeit with a fair amount of VFX and Butler’s own brand of sweaty, stress-bucket bravado. Both of those are to be expected in this type of mid-sized blockbuster, while what sticks in your mind most about Greenland are those moments when it doesn’t feel like a movie at all. 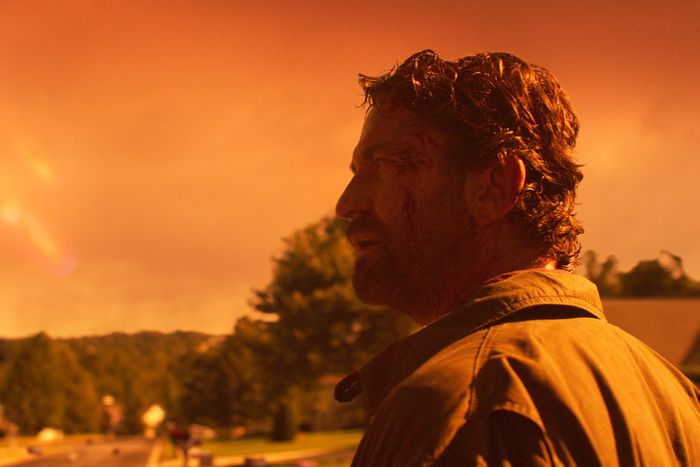