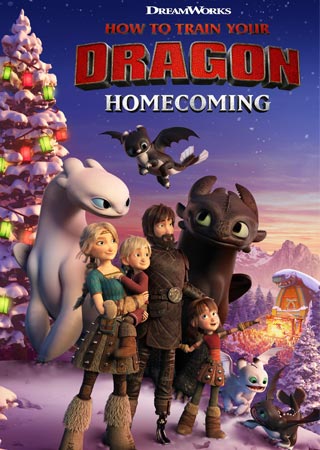 It’s the festival of Snoggletog on New Berk, but Hiccup isn’t feeling the holiday spirit. First, he misses his friend Toothless; second, he has just found out that his daughter Zephyr and his son Nuffink have found Stoick’s old journals (written before Vikings and dragons became friends) and now believe that all dragons are dangerous and should be destroyed. To help him possibly change their minds, Astrid suggests reviving the old traditions of Snoggletog, including a play in which Stoick the Vast’s memory will be honored and (perhaps) the children’s minds changed. Meanwhile on the Hidden World island, Toothless, through the use of sand drawings, tells his three Night Light children about his best friend Hiccup, inspiring them to make a secret flight to New Berk to see for themselves.

Review: How to Train Your Dragon: Homecoming

Overview (Spoilers Below): It’s time for Snoggletog on the Isle of Berk, but not everything is warm and cheery. Vikings and dragons have been living apart for years now, and the younger members of the tribe are beginning to resort to the fearful mindsets of the past,...