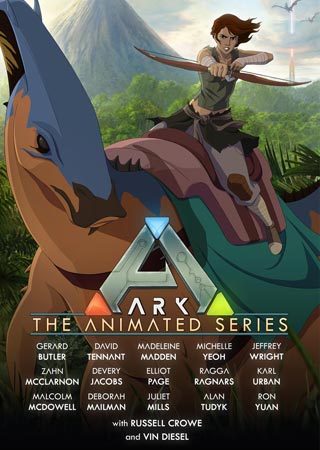 ARK: The Animated Series chronicles the story of a mysterious primeval land populated by dinosaurs and other extinct creatures, where people from throughout human history have been resurrected. When 21st century Australian paleontologist Helena Walker awakes on the ARK after tragedy, she must learn to survive and find new allies, or die again at the hands of ruthless warlords — all while trying to uncover the true nature of their strange new world.

Created and executive produced by the game’s creators Jeremy Stieglitz and Jesse Rapczak, ARK: The Animated Series is composed of fourteen 30-minute episodes and has two seasons currently in production in anticipation of a 2022 launch. Studio Wildcard has partnered with acclaimed director Jay Oliva (Batman: The Dark Knight Returns, Justice League: The Flashpoint Paradox) to executive produce and co-showrun, as well as Lead writers Marguerite Bennett and Kendall Deacon Davis who have written the scripts for the series.

Gerard Butler, Vin Diesel, Michelle Yeoh, David Tennant and Russell Crowe are lending their voices to an animated television series based on the video game ARK: Survival Evolved. Studio Wildcard announced the voice cast Friday and said the show is set to premiere in...